The Texas Chainsaw Massacre, who doesn’t know that name? It stands proudly among Friday the 13th, Nightmare on Elm Street and Halloween as one of the most recognizable horror franchises. To me it’s even more nostalgic, as it was the very first scary movie that I ever watched. What a lot of people probably aren’t aware of though, is that there was also a video game tie-in for the Atari 2600. Since we still have to wait for Texas Chainsaw 3D, I suppose we can review this instead.

Texas Chainsaw Massacre was a movie from 1974. The story involved a handful of teenagers/adolescents getting cut up by a deranged killer, not the most amazing plot nowadays, but it was very well executed. I even dare to say that it holds up by today’s standards. The killer of the hour was called “Leatherface”, a rather clumsy, but also imposing maniac that wields a chainsaw. Upon booting this game I assumed I would take on the role of Sally or some other survivor (in similar fashion to the Friday the 13th tie-in), but I was instead given control of Leatherface himself, that was a nice surprise. As Leatherface you have to run around the forest with your chainsaw and cut up as many screaming girls as you can. The only way to lose is running out of fuel, which happens over time, essentially turning this whole title in one of those old highscore-competitions.

Gameplay doesn’t really go further than that. All you really can do is walk around with the stick and use the button to activate your chainsaw. While chasing little girls you’ll constantly have to dodge the randomized scenery that gets in your way, if you happen to touch anything Leatherface will freeze in place for two seconds. There are also hedges, which you actually have to cut down before they disappear. I must admit that I really like the gameplay, since it contains the same kind of joy found in Iphone apps. You don’t play this game for hours upon end, you play it because the Playstation 3 is downloading a firmware update again and you need to kill some time. I have two complaints though: the first is that the game freezes after finishing it, forcing me to reset the entire console and the second is that the girls have this weird habit of teleporting around when you try to slash them up. Both are obnoxious inconveniences that display some rather sloppy programming.

In terms of presentation this game is only adequate. It has the usual graphics that come with Atari 2600 games, but for some reason they made the chainsaw the same color as Leatherface’s shirt. This causes the weapon to blend in with his body, so it looks like he has a growth coming out of his bellybutton. What annoys me the most though are the screams. Now the Atari is not the most amazing machine out there, but Christ, it can certainly serve better sound-effects than just a deafening beep. It sounds like nails on a chalkboard been blasted into your headset. I can’t even speak for the rest of the sound-design, simply because I had to mute the volume.

To summarize my feelings: Texas Chainsaw Massacre is not the most amazing Atari game (that title still goes to Mountain King), but it at least manages to entertain. I found the simple gameplay to be very amusing and replayable, even if some features seem to be broken. Visually it’s not very impressive, but at least it’s not as bad as the sound-department. If you can get this game somewhere for like ten dollars (you can’t) then I can recommend it, but due to this been a rare item, I would sooner recommend it to collectors only. 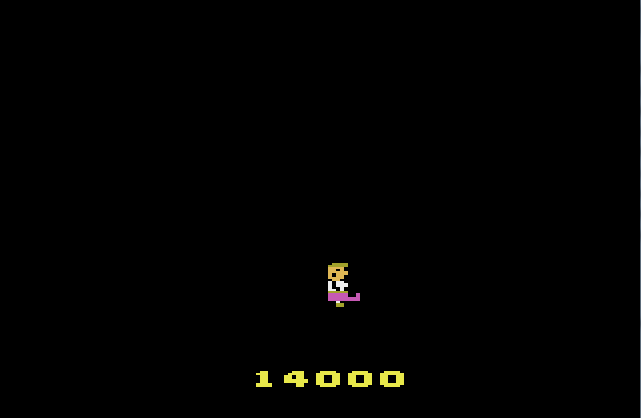 Who can beat my highscore?