Following the Saw tradition of releasing a new film every year, Konami released Saw II: Flesh and Blood this October, a year after the first game was released. In the first game, we took control of Detective David Tapp. This time around, we play as his son, Michael Tapp, hence the “Flesh and Blood” subtitle. Also, take note that I played the PS3 version of the game. 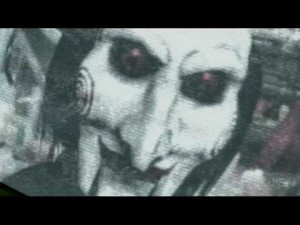 Like the first one, the game greets us with an “opening trap sequence” where we play as man named Campbell. Here we play a prologue (well it’s actually a lengthy chunk of gameplay) that will ultimately lead us to Michael’s story. This part of the game served as a nice warm-up for the bigger things to come. 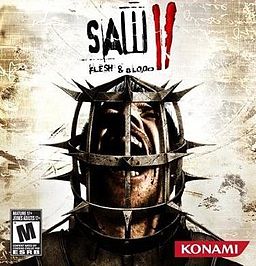 By the time we get to play as Michael, it’s back to the same old formula of the first game: finding clues, solving puzzles, fighting “Jigsaw’s minions“, and saving people from their traps. I must say though that the mini games and puzzles this time have improved a lot. On the other hand, they still tend to get a little bit tedious and repetitive but unlike the first game, they offered more “flavors” of the mini puzzles this time. A good example is the circuit puzzles on the first game, now they have 2 flavors of that; the point to point circuits and the polarized circuits. Now, the puzzles are fun but they can be so downright frustrating. They took the difficulty of the puzzles in a whole new level and there are parts where you are left looking at letters or symbols with very little hint on how to get a code to open a door. Still, the puzzles are the main strength of the game. I specifically like those moments that cause you to panic while solving a puzzle because of the timer. 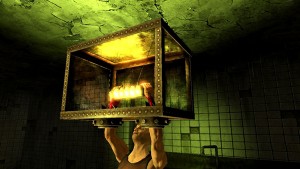 One of the game‘s strength comes from the atmosphere. It really stands out and it stayed true to the gritty environment of the first game (and the movies). In the first game, we pretty much got stuck navigating the same environment over and over again in an insane asylum. This time, we have abandoned subways, barricaded streets and a lot of industrial areas – in short, better level design this time. Voice acting has improved quite a bit but still needs some work. The score was composed by Alex Guilbert and Morgan Green  and they really did a great job in capturing the sense of horror in this game. The inclusion of the “Hello Zepp” theme by Charlie Clouser (Composer of all the SAW films) is another welcome bonus. 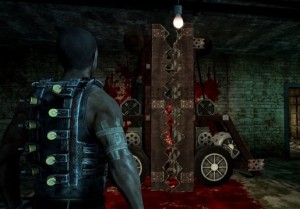 Now given with the strong atmosphere, the game failed in the graphics department, they could have done a lot better. I felt that they didn’t really improve anything on this aspect. There are also times where your character twitches (much like in the first game) when you try to walk over on objects such as boxes and other things in the environment. Jigsaw makes his presence felt throughout the game, through the tapes, and the whole place feels alive as doors open and locks by themselves. For those looking for gore, you’ll definitely be pleased; there’s lots of blood and guts in this game. Lastly, on the loading screen, we get random quotes from the movies which is kind of nice. 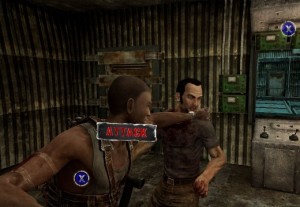 Another aspect of the game that failed in my opinion is the combat. In the first game, the combat was pretty much like the traditional survival horror games; clunky but manageable. This time, they resorted to quick-time events. This took a lot away from the “fun factor” of having that satisfaction of attacking and killing an enemy. It also lessens the sense of fear as you only have to wait for an enemy to approach you then you just press certain button combinations. Think of it like Heavy Rain + Saw = not a good combination. Weapons are now for one-time use only (since after entering the QTE commands, the weapons get destroyed) and there isn’t really a lot of weapons to choose from, I have only seen a bat, a nail bat and a crutch. Instead of improving the combat system, I felt like they took a side-step then another step backwards.

The whole game takes about 5 to 8 hours  of gameplay or longer, depending on how well you do on the puzzles. The game adds a little bit of replayability in the form of the collectibles: Billy Puppets, Case Files and Puzzle Pieces. If you’re also planning in getting all the endings, you may have to play the game all over again a few times. 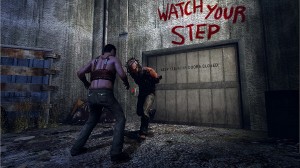 Ultimately, Saw II: Flesh and Blood is mostly created for fan-service. Fans of the Saw movies (like me) will get the most out of this game. The narrative, the Easter eggs, it’s mostly created just for the fans of the franchise. If you enjoy solving puzzles and riddles, then you’ll definitely enjoy this game if you can look past its flaws. If you didn’t like anything in the first game, by all means, don’t even dare touch this game – nothing will change your mind.