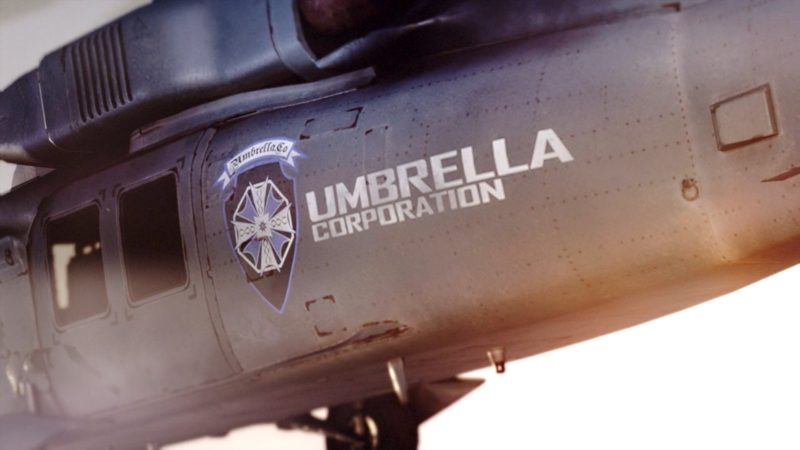 I can only assume the source of this info was written with the intention of us having already played the delayed Not A Hero RE7 DLC. Oh well, it’s here now, and it’s got all the answers for us regarding Redfield, Umbrella and more. Obviously – spoilers if you haven’t finished RE7 yet.

So we were left with some pretty insane questions at the end of Resident Evil 7, namely “is this dude really Chris, what’s up with the Umbrella Corporation helicopter he picks you up in, and why the hell does Ethan think they’re here to help?” Well, all that and more have been explained thanks to a booklet included with the Albert 01 gun replica just released in Japan. My assumptions and theories were way off, and I’d argue that a lot of people were way off regardless of which camp they sat in for who Redfield was. The translated text is as follows:

A large pharmaceutical conglomerate. Best known as a pharmaceutical company, the Umbrella Corporation possesses achievements in fields such as genome analysis and anti-virus medicine, yet has also conducted research and development of Bio-Organic Weapons (B.O.W.) for use as weapons. Its motto is “Protecting the health of the people,” which is what the name of the company is derived from. The T-Virus, developed for the purpose of creating immortal soldiers, led to the occurrence of the Raccoon City incident, which in turn revealed the dark side of the company to the masses.

Afterwards, confronted with accusations of culpability for the Raccoon City Incident, Umbrella’s stock prices crashed, plunging the company into a period of sustained financial losses. Furthermore, the existence of Umbrella’s illegal B.O.W. research became well-known around the world, thanks testimony from survivors and a considerable amount of physical. As a result, all of Umbrella’s executives were incriminated for the company’s crimes, and in 2003, the company declared bankruptcy.

That was translated from a portion of the document by Stevivor.com, the rest has been filled in (not sure in what order, but we’ll update if more info comes out) by fans that picked up the gun for themselves on the Resident Evil subreddit:

As for the many experimental data and results left by Albert Wesker, they were inspected within the rebuilt Umbrella and it was said to be extremely effective at redeeming most of the Umbrella Corporation’s dark legacy in those days.

With no convention to the old system, the “Blue” researchers summed up those research results and conducted development on the premise of mass production, supplying them to anti-biohazard units like the BSAA for testing.

If you’re wondering what it’s talking about in regards to Wesker, he stole a ton of Umbrella data at the end of The Umbrella Chronicles and used some of it to help tear the original Umbrella down. This information is what is driving the technology Blue Umbrella is using.

Overall, this is a lot to unpack, but the gist seems to be: The original Umbrella Corporation, and all its technology, have been repurposed by the US Government working with the B.S.A.A. to help actively destroy biohazard threats once and for all. The B.S.A.A. never used technology more complicated than regular old military equipment, and this new Blue Umbrella is using actual Umbrella developed anti-BOW technology (like the Albert-01 pistol that kills Eveline in just a handful of shots at the end of Resident Evil 7). However, while Blue Umbrella is working on the side of good, and Chris Redfield (we’ll get to him in a minute) leading the pack, Red Umbrella still exists in the shadows as Umbrella Corps.

The Umbrella Corps. are using this new Umbrella’s reputation as a cover for continuing their evil deeds, being led by someone with deep ties to the original Umbrella and who was present for at least most of the conflicts surrounding the Resident Evil universe. In fact, the only way you would be able to tell the difference between Blue and Red Umbrella is exactly that, the color of the logo (you know, before they start shooting everyone). This will more than likely lead to a conflict at some point between Blue (lead by Chris) and Red (lead by…), and it’s probably the conflict that will be at the heart of the RE universe for the next generation of stories. 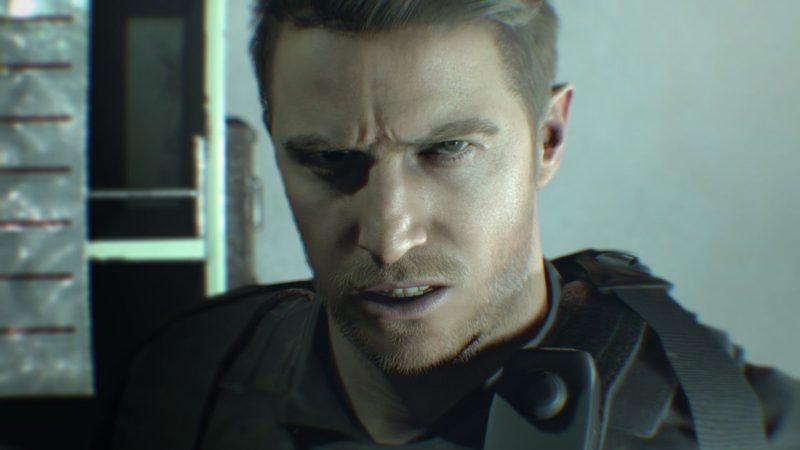 What about Chris? Well, the questions surrounding him have also been answered by this booklet:

Breathing a sigh of relief, Chris Redfield leaned forward and watched from the helicopter in the sky, the body glistening with a “blue Umbrella logo.” He was staring at Ethan who’d successfully “lived”, as if reflecting his own younger days. July 1998. If that damned “Mansion Incident” hadn’t occurred, what would my life be like now? Would I still be with Alpha Team of Raccoon City’s specialized division S.T.A.R.S., perhaps earnestly protecting Raccoon City day and night? Perhaps there would’ve been a future where I died when seriously injured in the Republic of Edonia… Or worse, might I have lived the life of an amnesiac alcoholic if I hadn’t met the late Piers? He was possessed by sentiment in a silence lasting only a few seconds. Only someone involved could understand the pain and sorrow. He cut off such sentiments and accomplished his mission again. In his hands is his steel buddy, the “Samurai Edge”…

So, yeah. Real Chris. I’m surprised, especially seeing as Capcom seems to just refuse to use the new model in other projects (especially Marvel vs Capcom where it would have been a perfect opportunity to use his new look), but oh well. That’s that; it really is the real Chris Redfield at the end of Resident Evil 7, working for Blue Umbrella.